(Based of materials published in https://www.history.com/this-day-in-history/first-man-in-space and Russian sources).

On April 12, 2021 the 60th anniversary of the first human spaceflight is celebrated. Six decades ago, at 9:07 Moscow time, the Vostok-1 spacecraft was launched from the launch pad №1 of the Baikonur spaceport with the world’s first cosmonaut on board — Yuri Gagarin, and the story that changed the world began. Yu. Gagarin’s achievement opened the era of human space exploration, proving that nothing is impossible and that any dream is feasible.

During the flight, the 27-year-old test pilot and industrial technician also became the first man to orbit the planet, a feat accomplished by his space capsule in 89 minutes. Vostok 1 orbited Earth at a maximum altitude of 187 miles and was guided entirely by an automatic control system. The only statement attributed to Gagarin during his one hour and 48 minutes in space was, “Flight is proceeding normally; I am well.”

… To  those who worked on the Vostok program and earlier on Sputnik (which launched the first satellite into space in 1957), the successes were attributable chiefly to the brilliance of one man: Sergei Pavlovich Korolev. Because of his controversial past, Chief Designer Korolev was unknown in the West and to all but insiders in the USSR until his death in 1966.

… The first Korolev’s plan to launch a satellite into space was approved, and on October 4, 1957, Sputnik 1 was fired into Earth’s orbit. It was the first Soviet victory of the space race… The Soviet space program under Korolev would go on to numerous space firsts in the late 1950s and early ’60s: first animal in orbit, first large scientific satellite, first man, first woman, first three men, first space walk, first spacecraft to impact the moon, first to orbit the moon, first to impact Venus, and first craft to soft-land on the moon…Korolev died in 1966. Upon his death, his identity was finally revealed to the world, and he was awarded a burial in the Kremlin wall as a hero of the Soviet Union. Yuri Gagarin was killed in a routine jet-aircraft test flight in 1968. His ashes were also placed in the Kremlin wall. 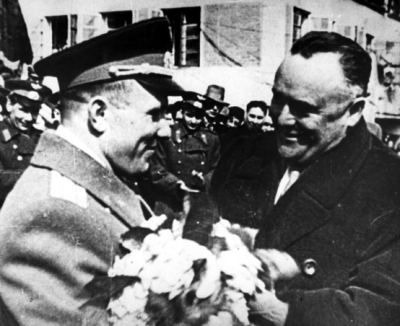