History. The German Instrument of Surrender was signed twice. An initial document was signed in Reims on 7 May 1945 by Alfred Jodl (chief of staff of the German OKW) for Germany, Walter Bedell Smith, on behalf of the Supreme Commander of the Allied Expeditionary Force, and Ivan Susloparov, on behalf of the Soviet High Command, in the presence of French Major-General François Sevez as the official witness. Since the Soviet High Command had not agreed to the text of the surrender, and because Susloparov, a relatively low-ranking officer, was not authorized to sign this document, the USSR requested that a second, revised, instrument of surrender be signed in Berlin. Joseph Stalin declared that the Soviet Union considered the Reims surrender a preliminary document, and Dwight D. Eisenhower immediately agreed with that. Another argument was that some German troops considered the Reims instrument of surrender as a surrender to the Western Allies only, and fighting continued in the East, especially in Prague.

A second surrender ceremony was organized in a surviving manor in the outskirts of Berlin late on 8 May, when it was already 9 May in Moscow due to the difference in time zones. Field-Marshal Wilhelm Keitel, chief of OKW, signed a final German Instrument of Surrender, which was also signed by Marshal Georgy Zhukov, on behalf of the Supreme High Command of the Red Army, and Air Chief Marshal Arthur Tedder, on behalf of the Allied Expeditionary Force, in the presence of General Carl Spaatz and General Jean de Lattre de Tassigny, as witnesses. The surrender was signed in the Soviet Army headquarters in Berlin-Karlshorst. Both English and Russian versions of the instrument of surrender signed in Berlin were considered authentic texts.

The revised Berlin text of the instrument of surrender differed from the preliminary text signed in Reims in explicitly stipulating the complete disarmament of all German military forces, handing over their weapons to local Allied military commanders.

Both the Reims and Berlin instruments of surrender stipulated that forces under German control to cease active operations at 23:01 hours CET on 8 May 1945. However, due to the difference in Central European and Moscow time zones, the end of war is celebrated on 9 May in the USSR and most post-Soviet countries.

To commemorate the victory in the war, the ceremonial Moscow Victory Parade was held in the Soviet capital on 24 June 1945. 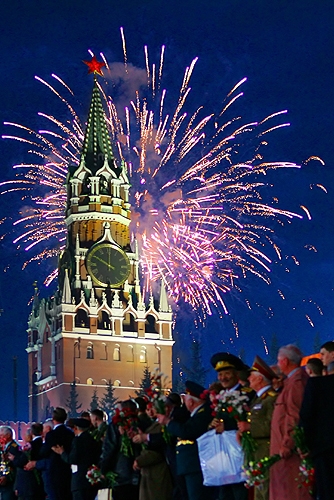